Andalusia day, what a festivity!

Andalusia day, what a festivity!

Know the past to understand the present 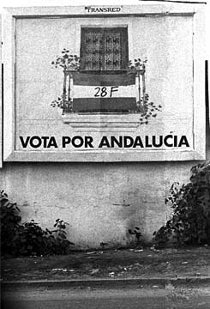 Ever heard of Andalusian Nationalism? This sense of feeling was already noticeable since the 19th century and the foundation of the today autonomous region Andalucia. Back then, Andalucia was part of another autonomouse region Castilla la Mancha. This against the wish of the people from (now) Andalucia. With this sence of feeling, people couldn’t do much since the dictatorial time frame.

Even though people couldn’t do much, nationalism in Andalusia gained popularity below the radar, during the period dictator Franco ruled Spain. Stil, people desired to be an autonomous region and after the death of Franco (1975), things changed drastically for Spain. For example, from 1977 political parties and unions became legal again and the monarchie was honored again. For Andalusia, it was time to to take matters into their own hands.

With the newly gained freedom, a million Andalusians went into the streets to request the opportunity to vote to become an autonomous region. This desire got honored. In 1980 on the 28th of February, people in Andalucia had the opportunity to vote in a referendum. From the 8 provinces we know now in Andalucia, 7 voted for an independent Andalusia. You can call this a huge succes!

Almeria was the only province where the people voted against an autonomous Andalusia. This created a huge political debate and the Spanish Court got involved. The outcome was yet unsure. There was even a possibility, Almeria would become its own autonomous region! Eventually Spanish court changed the law of the referendum. With this new law, the administrators of Almaria where the one to make the final decission. The administrators decided to ignore the vote of the people in Almaria, and decided to become part of Andalucia. And so, in 1982 Andalusia was officially an autonomous region when the ´Estatuto de Autonomía´was approved. Andalusia has its own regional government since then.